The Black Keys have agreed to sponsor the West Akron’s Baseball and Softball League.  Dan Auerbach and Patrick Carney, both hailing from Akron, now have another cool shirt our there.  The shirt, made with the intention to outfit the baseball team, has been such a buzzworthy idea, that the band has thought about making a limited edition for general sales and sending the profits right back to West Akron.

A Broken Heart is Blind

Had to…because RZA and The Black Keys should only hang out for BlakRoc II. 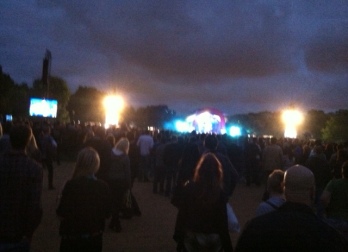 On September 29, Central Park packed a cool 60,000+ people onto the Great Lawn for the Global Citizen Festival.  The concert was a charity event devoted to ending poverty that featured three large acts and a slew of celebrity appearances.  The three notable acts were The Black Keys, Foo-Fighters, and Neil Young with Crazy Horse, who apparently raised $1.3 billion dollars for the cause.

I can’t say much about the ‘show’ because I didn’t stay to see all five hours, but it was definitely a cool experience.  K’Naan and Band of Horses performed early that preceded John Legend’s surprise rendition of “Imagine” by John Lennon.  It’s not a surprise that The Black Keys electrified the place with a serious instrumental during “Little Black Submarines.”  Their set also included “Howlin’ for You,” “Strange Times,” “Lonely Boy,” “Tighten Up,” “Gold on the Ceiling,” “I Got Mine” (and a few others).

Although not a Foo-Fighters fan (sorry a), I have to admit that Dave Grohl’s energy brought everyone to life–especially his fans who were all singing along.  He and his band members played and sang as loudly as they could to “Times Like These,” “All My Life,” “Learn to Fly,” “Arlandria,” “These Days,” “Best of You,” and a few other songs that all happened to sound the same.  In between screaming, Grohl announced that they wouldn’t be around for a while; that this would probably be their last show until he didn’t know when.  He admitted that although he would like to stay on stage for as long as he could, he really wanted to see Neil Young.

I think I would have preferred Grohl stay on stage after hearing the first of too many Neil Young songs.  I’m a fan of Young, or what I realized that night, I am a fan of 1969-72 Young and CSNY Young.  Yes, he is a legend.  Realistically, he is a 66-year old burnt-out musician who sounded better when he was a 30-year old drug addict.  It’s time to be sober (which he is!) off-stage.  I do give the man props, though: the final song of the night, “Rockin’ in the Free World,” put a spotlight on his natural talent and made him outshine the rest of the line-up that joined him on stage.

Joy to the world.

“Little Black Submarines” is one of my favorites from The Black Keys.  This new video is one from the road, off of “El Camino.”