Conflict of the Year

So D bought us tickets to the Gentlemen of the Road Stopover Tour in Gutherie, OK the day they released the tickets. I need to see Mumford people! I have been excited for months to see these guys live and I was even more excited when I heard Edward Sharpe and the Magnetic Zeros were playing as well as Alabama Shakes. What could be better right?!

Loufest in St. Louis has quickly become a tradition for the city. It brings major acts to the stage in Forest Park. And of course it is the SAME weekend as the stopover tour. I am completely bummed that I can’t attend this awesome festival in my own town!!! Forest Park is a great backdrop for some amazing performers and I know it is going to be an awesome show. This year the festival is bringing to the stage the killers, icona pop, , the mowgli’s, and edward sharpe the magnetic zeros and Alabama shakes (they must be taking a fast bus from OK to STL—maybe I could hop on).

STL has a good music scene that isn’t always recognized so it is pretty awesome that Lou Fest is bringing out some big names for some great publicity. Fun fact: the guy that started Lou Fest lives a street over from me and I met him a couple months ago.

I am going to try to get one of my STL friends who is attending the festival to report back to the jammers. c. 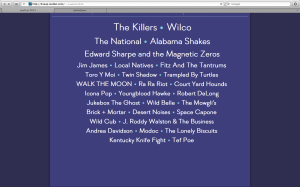