This is terribly overdue.  A few Mondays ago I saw the ‘brothers’ from Akron, Ohio at their sold out show at Madison Square Garden. For as big as that stadium is it never ceases to amaze me how intimate it remains. I felt like I was in something as small as a movie theater with my close friends, you know, just casually watching a Black Keys show. But then when the disco balls appeared during the finale, I realized how many fans were there. The place went nuts under what appeared to be a planetarium ceiling. Oh and did I mention that the two of them absolutely killed it? The new album, El Camino is perhaps their best yet; Gold in the Ceiling, one of the best tracks. It boggles my mind that only two people can make a sound that serious. They basically bleed rock and roll. Who would have thought that two nerds would be so badass?  I guess we all have a little rock and roll in us. 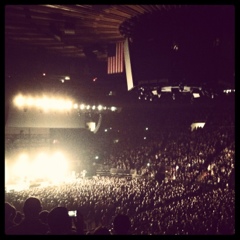